Our Team in Serbia 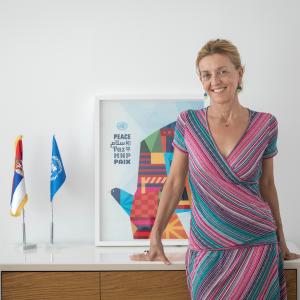 UN
UN Resident Coordinator
twitter
Ms. Jacob brings 24 years of experience in humanitarian and development work, including 10 years of service to the United Nations Office for Project Services (UNOPS) in Asia/Central Asia, Eastern Europe and Africa. From 2017 to 2019, she has served as UNOPS representative to the EU institutions in Brussels. Prior to that, she was the UNOPS director for South Asia (2011-2017). She held management positions with UNOPS, UNRWA, ECHO(EU), NGOs and the private sector in Afghanistan, the Middle East, East Timor, Sudan, Montenegro, Uganda, Rwanda and the Democratic Republic of Congo.

She holds a Master of Business Administration from ESSEC, in Paris. 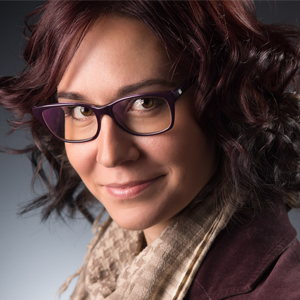 UNEP
Project Coordination Specialist
Aleksandra Siljic Tomic started her professional career in the development of EEA environmental core set of indicators for the Western Balkan region. She has also contributed to various fields of the regional efforts of ENVSEC Initiative, such as environmental remediation for mining legacies and climate change. She joined UN Environment in 2015, having a significant role in the preparation of the GEF funded project addressing land degradation in Serbia, later to assume the position of national project coordinator for projects and initiatives implemented by UN Environment in Serbia at both national and local level. Ms. Siljic Tomic holds a PhD in Environmental Engineering.
Read more 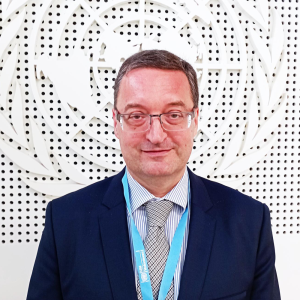 UNODC
Regional Adviser (anti-corruption and asset recovery) for South-Eastern Europe and Head of the UNODC Programme Office in Belgrade
A lawyer with more than 25 years of experience, Mr. Palicarsky is a part of a team, based in both Vienna and in the field, that is responsible for providing technical assistance to States parties to the United Nations Convention against Corruption for the more effective implementation of the Convention. 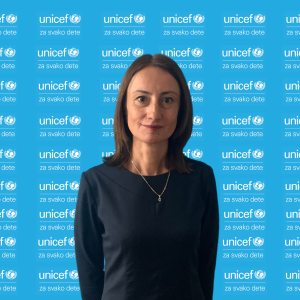 UNICEF
Representative
Ms. Deyana Kostadinova assumed her duties as the UNICEF Representative in Serbia in October 2020.

Prior to this assignment, she was the Permanent Representative of the Republic of Bulgaria to the United Nations Office at Geneva.

The new UNICEF Representative in Serbia has many years of experience on child rights, both as an expert and as a politician. She was the Deputy Prime Minister and Minister of Labour and Social Policy in a caretaker government in Bulgaria. Ms. Kostadinova has also worked as the Head of the Cabinet of the President of the Republic of Bulgaria and as an advisor to the Prime Minister. Her main achievements were always focused on the advancement of the child rights agenda.

Ms. Kostadinova held the position of Director-General of the "Monitoring on Child Rights" Directorate. During her term as the Director-General, she provided overall monitoring of the Child Protection Departments, specialized institutions, schools, hospitals, and NGOs.

Ms. Kostadinova has a Master of Law degree and she began her professional development as a lawyer specialised in human rights.
Read more

WHO
Representative
Dr Scano has over 20 years of experience in public health programme management and policy development in areas ranging from disease control, outbreak response, to regulatory strengthening. Dr Scano took up many important assignments with WHO Headquarters in Geneva and in the field including South Africa to assist the country with the outbreak of extensively drug-resistant TB in 2007.

In China, Dr Scano supervised all communicable and noncommunicable disease programmes in the WHO China Office, and supported strengthening of the National Regulatory Authority for medicine, vaccines and other health products. Since Jan 2020, Dr Scano has been at the forefront of the WHO COVID-19 response in China
first and then he provided support to the WHO European office on COVID-19 response. Prior to his assignment in Serbia as WHO Representative and Special Envoy of the
WHO Regional Director for the Western Balkans, Dr Scano was acting WHO Representative for WHO in Bosnia and Herzegovina.

Dr Scano is a public health specialist and holds a M.D. from University of Padua, Italy; a post graduate degree in Infectious Diseases and Tropical Medicine; and he is a Yale World Fellow.
Read more 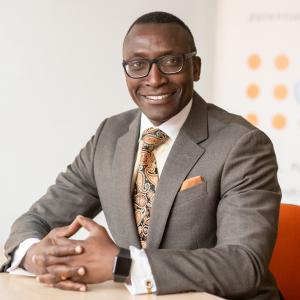 UNFPA
UNFPA Representative for Bosnia and Herzegovina, Country Director for Serbia and the Republic of North Macedonia, and Director for Kosovo (UNSCR 1244)
twitter
John Kennedy Mosoti holds Bachelor of Laws degree, Post-Graduate Diploma in Law, a Master’s Degree in Criminal Justice and Diploma in International Environmental Law. John is an established diplomat and brings with him twenty five years’ experience in the private sector, civil society, the United Nations as well as government. As the Chief of the Multilateral Affairs Branch at UNFPA, John
managed UNFPA's political interaction with Member States in the General Assembly, Security
Council, ECOSOC and its functional commissions as well as the UN secretariat. He later became
the Chief of the Inter-governmental, Inter-agency and Policy Dialogue Branch. Most recently, he
was appointed and served as Deputy Global Coordinator on ICPD 25 charged with the
organization of the Nairobi Summit: Accelerating the Promise.

John speaks Swahili, English, French and Arabic. He is married and has three daughters. 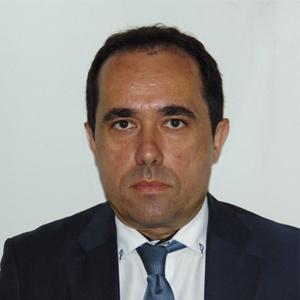 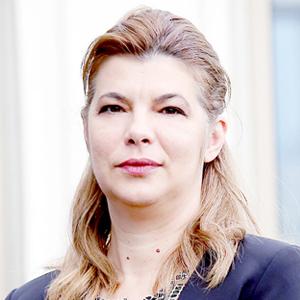 IOM
Head of Office in Serbia
Ms. Markovic has been Head of Office for IOM Serbia since 2012 and she holds a Master of International Relations from Belgrade University in Serbia. Over the course of her extensive IOM career she has been dealing with many areas of migration management, project development and coordination of regional initiatives in the field of migration. Prior to being appointed as IOM Serbia Head of Office, she was managing refugee resettlement programs, housing of refugees and internally displaced persons projects, programs aimed at combatting trafficking in human beings, programs of assisted voluntary return and reintegration, as well as programs providing psychosocial support.

IOM Serbia has actively supported Government of Serbia in all its migration related efforts. 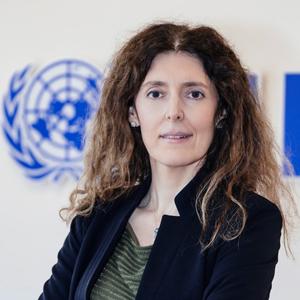 UNOPS
Head of Office for Serbia
Michela brings a wealth of expertise in humanitarian affairs, conflict analysis and resolution, team management in insecure environments. Prior to joining UNOPS, she held various senior positions as country director with the ICRIC in conflict-affected countries in Africa, Latin American and Asia. She also worked in the humanitarian policy and advocacy sectors in the UK and Canada, and in the financial sector in the City of London.

Michela holds a PhD in International Relations, a Doctorate in Languages and Literature and a Masters degree in Development Studies. Her research interests include international relations, the link between development and security, and Security Sector Reform.

She is fluent in English, Italian, French, and Spanish. 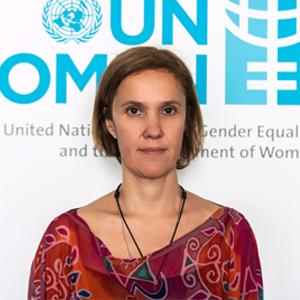 UN Women
Gender Specialist, Head of UN Women Serbia
Ms. Rikanovic has more than 20 years of professional experience with international organizations in the Western Balkans and Tajikistan, including UN organizations, World Bank and EU initiatives, where she has been leading diverse, complex and multi-sector programmes. This included the Women Economic Empowerment portfolio in Serbia and MNE where her engagement in the area of women's labour rights and gender-based discrimination was featured as the model programme of the economic empowerment of women inclusive of CSOs and local communities. She developed gender responsive governance portfolio in UN Women, where she initiated the programme at the local level and started the process of gender mainstreaming of the EU assistance and accession process and sectoral strategies and budgets.
Read more 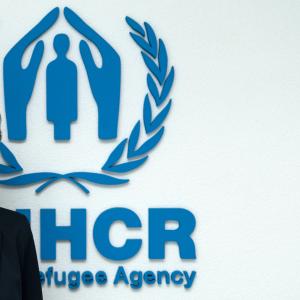 UNHCR
Representative a.i.
Ms Krause brings 17 years of humanitarian and development work, including in emergency operations, with a focus on management, social and economic rehabilitation, education, and humanitarian coordination. She has been working with UNHCR for 13 years in the areas of refugee protection, emergency and program management, advocacy and partnership building, and policy development. She has worked with UNHCR, NGOs and development partners in Africa, Asia, Europe and at UNHCR headquarters.
Ms Stefanie Krause assumed her functions at the UNHCR Representation in Serbia in September 2020. She was assigned Representative ad interim, UNHCR Representation in Serbia in April 2022. 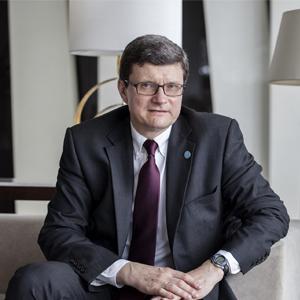 FAO
Assistant Director-General, Regional Representative for Europe and Central Asia
Throughout his career, Rakhmanin has dealt with key policy issues at global and regional levels, including assignments in Beijing, Washington D.C. and Moscow.

Prior to joining FAO in January 2014, he was deputy head of the Energy Charter Secretariat in Brussels. 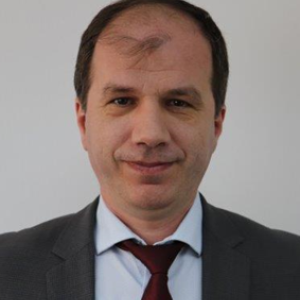 Prior to his assignments in Serbia and Kazakhstan, Mr. Beris led UNDP’s Regional Programme for Arab States based in Amman, Jordan and served as Regional Programme Adviser for the UNDP Regional Bureau for Arab States in New York. He led a team delivering various regional projects in diverse development settings across the region, which included work on economic integration, social cohesion, anti-corruption, gender, climate resilience and crisis response.

Mr. Beris also worked in senior positions in UNDP country offices in Khartoum, Sudan, during the finalization of the Comprehensive Peace Agreement as well as in Amman, Jordan, leading a programme focusing on policy advise and capacity support.

Prior to UNDP, Mr. Beris worked for the World Bank in its several departments in Washington, D.C. focusing on social development, governance and decentralization in Africa and Middle East. He also worked for Turkish Business Association (TUSIAD), a CSO/think tank, established by business leaders in Turkey, both in its Istanbul and Washington, D.C. offices.

Mr. Beris co-authored book chapters and articles on governance and decentralization and wrote on political and economic reforms in Turkey.

He holds an MA in public management from Maryland University, College Park in the USA and a BA (double major in political science/international relations and sociology) from Bogazici University in Turkey. He is married and is a proud father of two kids.